Local scuba instructor, underwater photographer, and environmental activist Annie Crawley will lead her young dive team in another marina cleanup dive this Saturday from 8:00AM – 1:00PM. These divers help keep our waterways clean by finding and removing any debris or garbage discovered on the sea floor. They will be working near the M, N, P & Q docks. Stop by and check out their unearthed “treasures” or lend a hand as shore support. 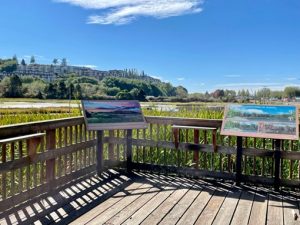 The Port of Edmonds has established a fund-matching program to purchase an Edmonds Marsh viewing scope in honor of late Edmonds wildlife photographer Bill Anderson.

The City of Edmonds recently launched a fundraising campaign for $5,000 to purchase a wildlife viewing scope for the Edmonds Marsh. The effort recognizes Bill Anderson, who was a beloved wildlife photographer and local advocate for the marsh. His keen interest in ecology and wildlife behavior allowed him to capture beautiful images at the marsh and along the Edmonds waterfront. His photographs were featured regularly in My Edmonds News.

After learning of the campaign, Port of Edmonds commissioners “unanimously and enthusiastically” decided to establish a fund-matching program to increase the impact of the community’s contributions, the port said in a Tuesday announcement. From now until the campaign ends on Oct. 31, 2021, the Port of Edmonds will match all monetary contributions until the goal of $5,000 is achieved.

Commission President Angela Harris said she hopes this offer from the Port of Edmonds will encourage community members to become involved in this campaign. “Bill appreciated and enjoyed the marsh,” she said. “We want to honor him and his contributions to marsh and wildlife awareness as well as provide the opportunity for others to enjoy it just as he did.”

According to the City of Edmonds, the selected model is a SeeCoast Mark I telescope with a 20×60 optic optimal for wildlife viewing. The scope will be mounted on an ADA-accessible platform; installation is currently planned for spring of 2022.

To donate, mail a check payable to the City of Edmonds to the address below or call to donate by credit card. Please be sure to specify that your donation is for the Bill Anderson Memorial Scope Fund. Donations will be accepted through Oct. 31.

As reported by My Edmonds News